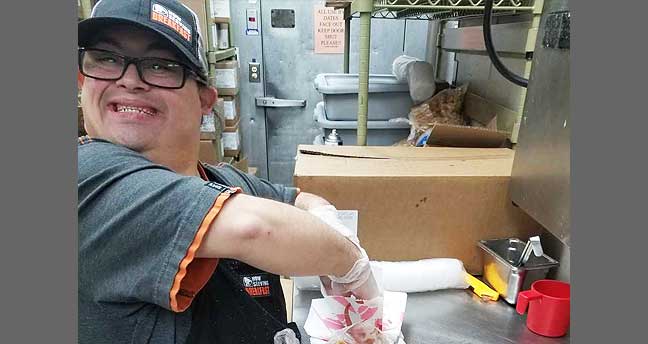 Nick has worked at Taco Bell in Avon since February of 2018. He works as a crew member assisting with food preparation for the hot bar and fried foods. Nick went to Taco Bell at the end of January to fill out an application with his Employment Consultant, Megan Donovan. After turning in his application, he was asked to come back for an interview the next day! Nick has previous experience working in the food industry, so between this experience and his outgoing personality he was hired on the spot.
Nick has learned and memorized recipes including how to make refried beans and rice. Nick makes trays of cinnamon twists and tortilla chips. He has also mastered frying taco shells, nacho fries, tortilla bowls, Cinnabon Delights, and so much more. Nick is open to assisting any of his coworkers to keep Taco Bell running as efficiently as possible.
Nick keeps everyone happy while he dances along with the background music at Taco Bell. He has been independently working at Taco Bell for several months now and loves his job!