Ben is Learning New Skills Thanks to Employment Services 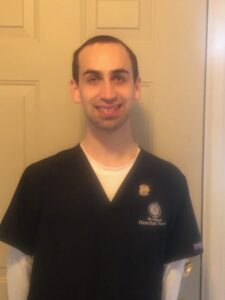 Employment Services helps individuals increase their independence and quality of life. Ben has been receiving employment support from Sycamore Services and has worked approximately two years at Hamilton Pointe, a senior living community near Evansville. Ben has always been a fast learner and his supervisor, John, noticed he has a somewhat photographic memory.

Hamilton Pointe staff are very supportive of Ben. Ben cannot tell time, therefore, staff would tell him when he needed to take lunch and when to catch his bus home. Ben’s co-workers also initially took turns helping him clock-in at work and he has now learned that task and does it on his own.  Ben has clocked himself in for the past year and has only had one mistake!

With the help of his job coach, Rudy, Ben also learned how and where to catch the bus that takes him to his residence after work. Ben celebrated a recent milestone, he cooked bacon and eggs in the kitchen at Hamilton Pointe.  Ben’s mother is proud of his growth and accomplishments, and so are we! Congratulations, Ben, on your job success!