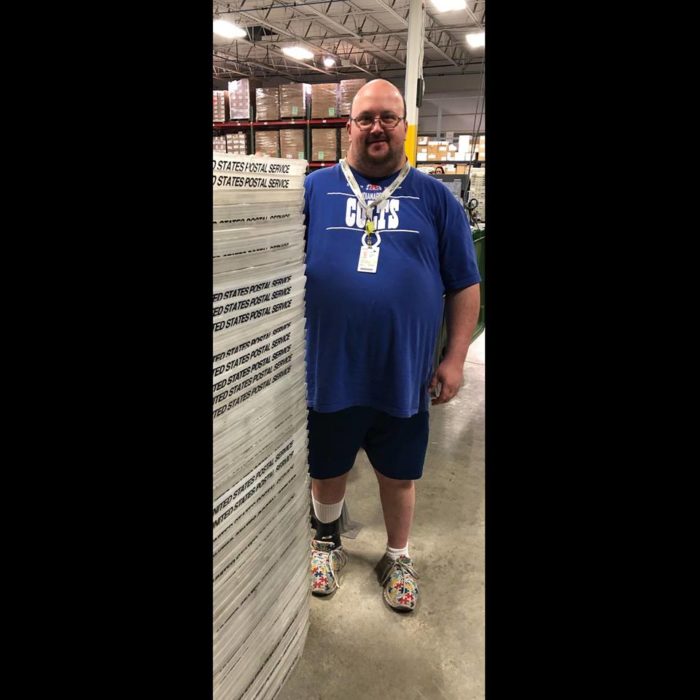 With the help of two Employment Consultants, David has been a successful employee since 2002. He started off as a Dietary Aide in the kitchen at Harrison Retirement Center and worked there for 12 years. After that, he was a Community Intern at IU West Hospital, stocking medical carts in the ICU. Two and a half years ago, David began working at Post Masters. He was hired immediately after a trial run.

Despite his disability, David is an incredibly productive worker at Post Masters who is well-liked and respected by his superiors and co-workers. He works 25 hours a week, as an Optical Character Reader Sweeper. His principle job is to gather envelopes that are ejected from a document inserting machine onto a conveyor belt. He takes the envelopes from the conveyor belt and ensures that addresses are visible through the envelope window. He loves to see all the different places that the mail goes each day. David knows how to work on 10 different machines at Post Masters, and often is asked to help with other projects around the building. He has even spent some time helping assemble and box calendars at Octopus Printing, which is housed in the same building as Post Masters.

David shared, “They really love me here, they do!” Because of his hardworking nature, David is well liked by his co-workers and supervisors. He loves helping people and often takes initiative to help with other jobs when he is done with his tasks. He never refuses a task or complains, and he always maintains a pleasant or can-do attitude on the job. Because of his job, David has become much more independent. He has been able to live in his own apartment which he shares with his cat, Shadow. David has been able to add skills and increase responsibility since he started working at Post Masters.

David has lived in Indianapolis for over 20 years, so it’s no surprise that he is a big Colts and Pacers fan. He also loves spending his free time playing Candy Crush on his phone. According to Lee Wilhite, David’s former job coach, his supervisor has said, “I’d love to have a dozen more employees like David working for me.”